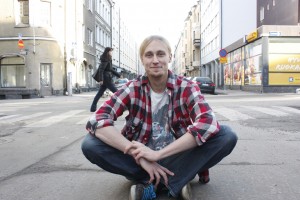 Jaakko is a social innovator, producer, co-creator and activist from Helsinki, Finland. He’s co-founder of Yhteismaa (Common Ground), a non-profit organization specialized in new participatory city culture, social innovations, co-creation, social movements and placemaking. All the projects of Yhteismaa aim for a more fun, free, sustainable, responsible and social urban life. These include an international flea market day, setting up a table for a thousand people to eat in the middle of a street, art exhibitions and theatre in homes, projects with refugees, working with unemployed young people and many others.

In addition to Yhteismaa, Jaakko is the founder of many other projects like Stories from the Refugee Centre, Restaurant Wasted Space and Hoffice Helsinki network. He is also the founder of Social Innovators Connected, an international network, which brings together social innovators, urban activists and other good-doers to learn from each other.

As you might have already noticed, I’m interested in quite many things. But it’s all about challenging the common ways of thinking, bringing people together and creating something new. And making the world a bit better place.